A re-elected Andrews Labor Government will help Victorians save around $890 a year on their power bills with half price solar panels at no up-front cost.

Victorians will be able to install a solar panel system for half price and pay the rest of the cost back over four years with an interest-free loan. This will save the typical Victorian household up to $2,225 for installation of an average 4kW solar system.

A new independent agency, Solar Victoria, will be established to work with industry, regulators and training organisations to deliver the program, which will create almost 5,500 new jobs.

This massive investment will bring the number of homes in Victoria with solar panels to one million within ten years.

It will also cut our carbon emissions by almost four million tonnes – the same as taking one million of Victoria’s 4.6 million cars off the road – and generate 12.5 per cent of Victoria’s 40 per cent target for renewable energy by 2025.

However, we know Victorians are struggling with higher electricity prices right now. That’s why the Labor Government will immediately invest $68 million to launch the Solar Homes program.

From today, Victorians will be able to install a solar panel system and get half of the cost back via a 50 per cent rebate. This will be expanded to include the interest-free loan from July next year, under a re-elected Labor Government.

The 50 per cent rebate on solar panel systems will be available to Victorians with a household income of up to $180,000 who live in their own home valued at up to $3 million – this means almost nine out of 10 Victorians who own their own house are eligible. 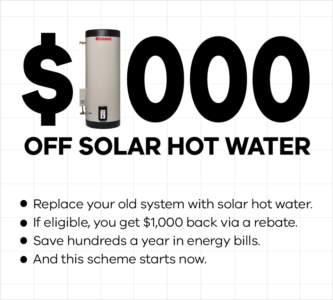 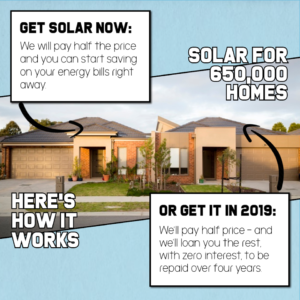